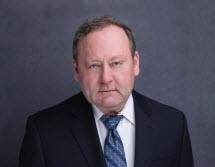 Rodney Fagerman joined Conklin Benham in December 2003 and is an associate attorney in the Grand Rapids office.

Mr. Fagerman began his college education at Kalamazoo College and later transferred to Western Michigan University where he obtained a Bachelor of Science Degree in 1977.  He received his Juris Doctorate Degree from Thomas M. Cooley Law School in 1986.

Prior to pursuing a career as an attorney, Mr. Fagerman joined the St. Louis County Police Department as a police officer and was later promoted to detective. As a police officer, he received two Awards of Excellence.

After graduating from law school, he began his practice in the area of insurance defense, specializing in workers’ compensation and tort defense. For the past 14 years, he has focused his efforts in the area of workers’ compensation, representing major retailers, manufacturers, insurance companies, and self-insured businesses, not only in western Michigan, but throughout the entire state of Michigan.